Why Currencies Trade Against the U.S. Dollar As we all know, currencies in the Forex market are always traded in pairs. You might have noticed that most currencies are traded against the U.S. dollar, which shows the influence the U.S. has in the global economy.

We discuss in this article the historical reasons behind the U.S. dollar’s dominance.

The dominance of the U.S. dollar started when it was chosen to be the world’s reserve currency in the Bretton Woods agreement in 1994. Unlike other major countries, the United States was the only major nation that showed resilience economically after the Second World War.

Under the Bretton Woods agreement, other currencies were pegged to the U.S. dollar, which in turn, was pegged to the price of gold.

Market Capitalization Represents The Stock Price of A Company

Traders Must Know The Roles of Support and Resistance Levels

Below are the major currencies in the Forex market — all traded against the USD.

The EUR/USD pair, the most popular among traders, accounts for over 20% of overall trading volume in the Forex marker. Most brokers today offer the lowest spreads for this pair. In addition, the EUR/USD pair is not too volatile, making it the best pair for beginners start with.

Accounting for over 13% of total trading volume, the USD/JPY is also a popular pair for traders. This pair is easy to follow and can give better trading opportunities to traders. The U.S. and the European Union are Japan’s largest trading partners.

A volatile currency pair, anyone who wishes to trade the GBP/USD pair should take due diligence. However, its volatility doesn’t stop traders to speculate as they are able to find many market analysis information online.

Up to this day, traders still see the Swiss Franc as a safe haven currency because of its former convertibility into gold. The CHF symbol comes from Switzerland’s Latin name, Confederacion Helvetia Franc.

As an export-dependent country, Australia’s currency with a slang term mainly trades with the commodities market. Australia holds the 13th spot in the world’s largest economy ranking. Additionally, China is one of its primary trading partners.

The United States and Canada are major oil trading partners. Therefore, the U.S. Dollar versus the Canadian Dollar exchange rate tends to be sensitive to the price of oil.

Market Capitalization Represents The Stock Price of A Company Market capitalization or market cap represents the stock price of the company multiplied by the number of outstanding shares. The...

Traders Must Know The Roles of Support and Resistance Levels 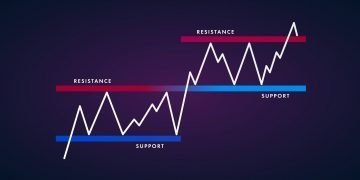 Support and resistance levels assist traders to understand the market better. As we all know, anyone who has a better...