US to Fight EU in a New Trade War

Despite having a cardinal trade war against China, the United States of America is preparing to fight another trade war. This time, the country will be fighting the European Union. Besides numerous trade wars going on in the world, the US is about to embark on another one despite having one against China. This time, US is apparently going to declare a trade war against the European Union (EU).

The Trump administration has announced that they will impose tariffs on USD 7.5 billion in European imports. Reportedly, the tariffs will mainly address products such as cheese and wine, and will be active starting from October 18.

Accordingly, this novel US-EU trade war will soon enlist in the trade war universe. In addition, its existence potentially contributes to catastrophic global economy slowdown. Thus, it will further damage the main artery of world trade.

In response to the administration’s statement, EU thinks that it does not make sense. Additionally, EU will ‘rebalance’ tariffs on USD 3 million worth of US steel, agricultural and other products.

Tapering, What Is That?

Why can’t Communism Work and Sustain in The World?

Also, many analysts even argue that President Trump is simply following his ego. A new trade war will surely backfire since Washington is currently suffering from another dispute against Beijing.

READ NOW :  Why Communism Does Not Work

“I would ask the United States to negotiate with us rather than having a tit-for-tat trade war that only does damage to both economies,” said Phil Hogan, European Commissioner for Agriculture and Rural Development.

What Caused the War and What It Might Cause

The chief cause of the war was the ‘illegal’ assistance from EU to Airbus,  a European multinational aerospace corporation. Accordingly, Airbus is a competitor of Boeing, US multinational corporation working on the same field.

Considering the disadvantageous move to Boeing, US does not want to sit idly. After pledging for a tariffs to WTO and getting the approval, Trump administration began to make its move.

After WTO declared that EU illegally helped Airbus, EU said the same thing about the US that they have been illegally helping Boeing. However, WTO has not given any words pertinent to the report.

Phil Hogan said that US move might be dangerous for itself. Besides the negative, direct impact to its economy, US might have to deal with any potential issue that might arise if something goes wrong for Boeing.

In addition, this might strengthen the possibility of global recession. Analysts argue that they do not need another trade war for the existent ones are more than enough.

“This step triggers fears of a new round of escalation of tariff wars. The introduction of tariffs and fears of tit-for-tat steps could further suppress business sentiment, which is already at the lowest levels for years,” said Alex Kuptsikevich, a financial analyst with brokerage FxPro.

US participation in some trade wars, this one and the US-China trade war, shows that US cannot do as it pleases. This is so for, although US has arguably become the big ‘daddy’ of the global economy, other parties are not under its control in terms of economy.

Even worse, for Trump personally, any disadvantageous outcomes will affect his electability. Since the upcoming presidential election is getting closer, his trade wars will do more harm to him.

Also Read: Another Trade War Coming Up, Indonesia vs EU

Tapering, What Is That? Tapering has recently become a word that is often discussed in the financial world. It is also the word that...

Why can’t Communism Work and Sustain in The World? Communism, as a country's political and economic view, might sound ideal in theory. However, why does not it work in... 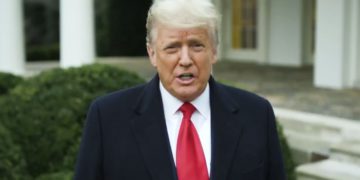 Chaos errupted as Donald Trump encourages his supporter to march the Capitol, again defying his loss in the Presidential Election.